The largest land animals ever to walk the Earth, Dinosaurs can’t help but inspire awe in children of all ages. With popularity undoubtedly booming with the reboot of Spielberg’s classic movie adaptation of “Jurassic Park” and plenty of inspiration to choose from, the RC world has its fair share of remote control models inspired by these incredible creatures!

Want to learn how to get started in RC? Check out An Introduction to Remote Control Cars in 2020 by Matt Benfield.

Standing at 23″ tall, this T-Rex from Advanced Play is a cheap but functional dino that kids will love. Controls are easy with a simple, intuitive controller design. And although the turning controls are a little limited, the walking action is stable. Where the magic happens is thanks to the harmless steam dispenser inside the T-rex’s mouth, giving a realistic breathing action! There’s plenty of sounds and music to accompany the dancing, and with multiple volume options, it’s easy to adjust at the push of a button. As a bargain choice, the Advanced Play T-Rex is great for little dinosaur lovers!

Liberty imports have a host of dinos at their disposal with their clearly Jurassic Park inspired, “Dinosaur World” series. Featuring a Triceratops, brachiosaurus, velociraptor, and exotic dragons lines, which all feature IR remote controls, allowing you to control their walking and head functions. Included are a host of sounds and light-up eyes, controllable with a button on the dino itself, and despite the budget price, there’s a range of articulation on the head, arms, neck, and legs. The Liberty Imports Dino Planet Range is perfect if you’re looking for a specific dino!

With an exciting, vibrant design based on a Tyrannosaurus, the Fun Little Toys T-Rex might not have the most authentic body movements, but what it does offer is detailed, realistic looks for a very reasonable price. Lacking any flashy lights over the spine, most of the look of a dinosaur is preserved, except for some lights in the mouth and eyes. Overall this takes a lot less away while still giving younger kids something to look at. Its simple, intuitive controls offer both forward movement and control of a steam sprayer for realistic breathing, easily refilled using the top fill port on the head. Also, coming with a set of more realistic sounds instead of music helps sell the look.

Tuko has an affordable pick for the younger audience with this fantastic little T-rex. With lights running along the spine and inside the mouth, it’ll keep a toddler’s attention easily. And with its chunky simple controls, kids can easily control the dino as it walks around, roars, and dances along to the music! While the range of movement isn’t anything special, it’ll be more than enough to entertain smaller kids and its chunky buttons are easy to press and the speakers are nice and loud. The looks aren’t bad either, with a decent quality plastic used on the body.

With a design that looks like a radioactive mutation from the past, the TEMI remote control T-Rex is a mobile beast with little motorized wheels on the feet, allowing for speedy movement. With its gamepad style controller, you have full control over the movement, and running it forward kicks the feet up as it rides along supported on the tail! A row of flashing lights on the spine and its shaking head, while looking slightly unrealistic, still looks great in action. Also included are controls for sound effects and a demo mode to show off all the interactive features. Not only that but with the included 4.8v 400mah rechargeable battery, play can go on for longer!

While less like your typical dinosaur toy, this pair of dino dune buggies from BCP make a great gift for siblings! At a tiny 1:43 scale, featuring two separate MHz remotes with different frequencies, friends and family can race against each other, piloting the reasonably quick little racers with the small but comfortable controllers. With chunky rubber tires, these are great for both on and off-road racing. While there’s nothing much in the way of extra features, for a quick pick up and play gift, this pair offers an excellent opportunity to race with a design that’ll make any dinosaur-loving kids happy.

The original Roboraptor design gets a modern refresh with Roboraptor X. Sporting both an intuitive Gamepad style controller for regular functionality, as well as an IR blaster for app-based controls (IOS / Android); you’ll be able to control functions such as movement, dancing, and guard modes with its microphones, IR sensors and more. While the included blaster and app require older hardware due to its’ reliance on a 3.5mm headphone jack, there’s still plenty of fun to be had with what’s included in the box.

With a design reminiscent of the Roboraptor X from Woweee toys, Fistone packs more than the basic bite with a canon on its back, able to fire sucker bullets from the controller! And with up to 50 steps in its programable routine options, you can guide the dino through several actions at your disposal. Featuring dancing to music samples, shaking of the head and tail at command, and some very casually ripped sound effects from both Star Wars’ R2D2 and various popular music samples, there’s tons of fun to be had!

From the original pioneers of the robot creature boom in the early 2000s, WowWee’s popular ‘Robosapien’ was one of the first models really pushing the idea of multiple sensors. WowWee returns with the MiPosaur, bringing a host of updates, taking it firmly into the current day. There’s plenty of features that this fast-moving, rolling raptor packs under its distinctive little frame. Featuring gyroscopic wheels similar to a Segway and supported by the tail, it is possible to easily turn and maneuver.

Armed with its host of sensors, the Miposaur can track hand movements and follow along with you, or alternatively keep track of it’s included “Beacon sense” ball. Emitting IR lights for the sensors on the Miposaur to keep track of position, you’ll be able to play games of fetch, dancing, go on walks, and more! Paired with a smartphone and the accompanying app (Android, IOS), it’s able to become a full virtual pet! Feeding it treats and playing games or taking direct control with dual stick controls from your phone. There’s plenty of hidden features just waiting to be discovered with time and attention!

Sharper Image brings an RC robotic dinosaur range that offers something for every budget. With the mini version, you get a similar physical design but with a simple forward and reverse spin option on the remote. Spending out for the trainable model nets you a larger, more impressive build with a host of interactive features. With direct driveable control, a set of sensors in the face offer motion tracking and guarding of an area and articulated legs over a pair of wheels for fast, stompy movement. This offers an impressive range of movement without feeling too slow and clunky compared to some of the more basic motorized walking cycles of other RC dinosaurs. With different moods indicated by the change in LED eyes, watch as it switches from playful to hunting the room for prey! 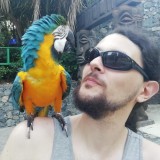 If it runs on electricity, Mike's probably tinkered with it. From RCs to PCs, Paintball to Pinball. Whether it's the newest trending tech or a retro blast from the past. If you need to know if something's worth your time, he's the guy to ask.